Here are monthly updates on the construction of the expansion and renovation project at the middle school.

Voters in the Southern Boone School District approved the $7.7 million bond issue last April for the middle school construction project. The project will connect the two buildings with the new addition, which consists of a new main office, science labs, library and vocational area. The project also includes converting the current office and library into additional classrooms, and other much needed improvements to the middle school.

In the new middle school addition, the HVAC contractor has set the rooftop units and have started setting the Samsung ceiling cassettes. The sheetrockers are roughly 90% complete with hanging drywall. The sheetrock finishers have completed the four science rooms and two science prep rooms. The painters have installed one coat of wait paint in the science rooms. The masons are roughly 95% complete installing brick veneer on the west walls of the new addition. The flooring subcontractor has started laying ceramic wall tile and ceramic floor tile in the new restrooms. The MEP contractors are making excellent progress installing their rough-ins. Don Schnieders Excavating is continuing to pour the west concrete parking lot. In the south building, the HVAC contractor installed the four rooftop units, and the flooring subcontractor installed ceramic wall tile and epoxy floors in the restrooms in the north wing of the south building over Spring Break. 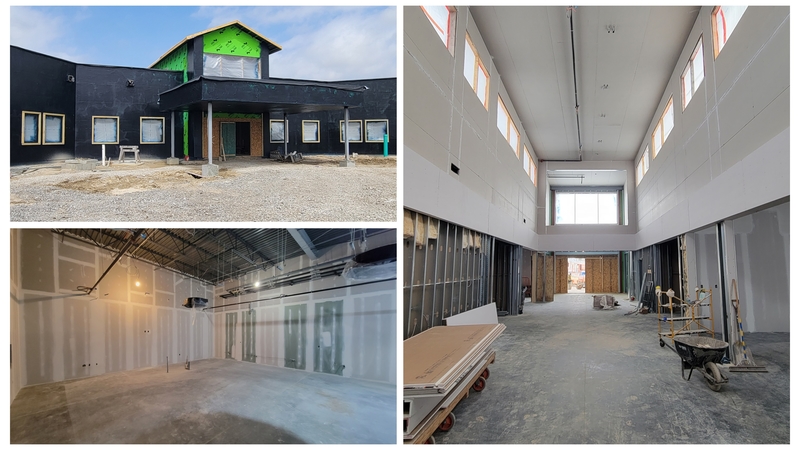 In the new middle school addition, metal stud framers have completed 95% of the interior metal stud walls and have started insulating and hanging drywall in several classrooms and hallways. The MEP contractors have made a lot of progress installing their rough-ins, which includes ductwork in the hallways. The roofing company has installed all of the new new rubber roof, with the only exception being the two new small canopies. Don Schnieders Excavating has started pouring the west concrete parking lot. Turning to the renovation part of the project in the south building, painters and ceiling subcontractors were able to get five existing classrooms and teacher workrooms painted and ceiling grids installed. The group restrooms in the north wing of the south building are ready for the ceramic wall tile. Finally, the roofing company finished the remaining section of the roof tear off and replacement.

Work is continuing on the middle school construction project. With the new addition, the metal stud framers are roughly 90% complete with the interior metal stud walls. The MEPS contractors are installing their rough-ins. The weather over the last two to three weeks has not been kind to the roofers (snow, cold and rain showers), but even despite the weather conditions, the roofers have still been able to make good progress on the new addition. The roofers are roughly 60% complete with the new rubber roof. In the middle school's north building, the plumber and HVAC contractors have been installing piping and ductwork in the old locker room area. With the south building, the metal stud framers have installed new walls in five existing classrooms. The sheetrock finisher started working in the same five existing classrooms, and and are beginning to mud and tape the sheetrock.

A lot of progress is being made with the middle school construction project. With the new addition. the iron workers have completed all of the steel columns, beams, roof bar joints and metal decking. The metal stud framers have finished installing the metal trusses over the high roof area, and are making a lot of progress installing interior metal stud walls. The plumbers, electricians and sprinkler pipe fitters are onsite and have started their work. The roofers are scheduled to start working on the new addition's roofing system.

In the middle school's north building, contractors installed casework, cabinets and countertops in the classroom and installed the majority of the remaining ceramic wall tile in the east hallway over Christmas break. The roofers have completed removing and replacing the rubber roof. Over the next several weeks, the roofer's sheet metal subcontractor will start working on the fascia, gutters and downspouts.

In the south building, Prost Builders was able to pour back the concrete slab in the existing classroom with the floor issue, and set new cabinets and countertops in four classrooms. The roofers were able to remove and replace the roof on the west wing, east wing and the entire north wing. The remaining re-roof work consists of the south center part of the middle school's south building.

Work continues on the middle school construction project. With the new addition that is being build, the iron workers have installed roughly 90% the steel columns, beams, roof bar joist and metal decking. The metal stud framers are making excellent progress installing walls and exterior wall sheathing.

In the middle school's north building, roofers are on track to finish work on the north building this week. Once that work is complete, the roofers will transition to the south building to start reroofing, and possibly start working on the roof of the new addition. Over the holiday break, contractors will be working on installing the casework/cabinets in the classrooms and installing the remaining ceramic wall tile in the east hallway. In the middle school's south building, Prost Builders are projected to pour back the concrete slab in the existing classroom with the floor settlement issue.

There's a lot of work happening with the middle school construction project. The steel frame of the addition is going up. The roof bar joists and metal decking arrived late last month. Last week, the structural steel was delivered. Crews have assembled around 50% of the steel column, beams and bar joists. The masons have completed the load bearing concrete block walls. Over the next several weeks, the iron workers will continue to construct steel and install the metal decking.

Late last month, Firestone Manufacturing delivered the remaining 2.5 inch composite boards for the middle school roof. Over the last two weeks, the roofers were able to return and continue replacing the roof along the east side of the north building. The roofers have roughly two to three weeks of work remaining on the middle school north building. As the weather allows, the roofers will be transitioning to the south building and start reroofing in December.